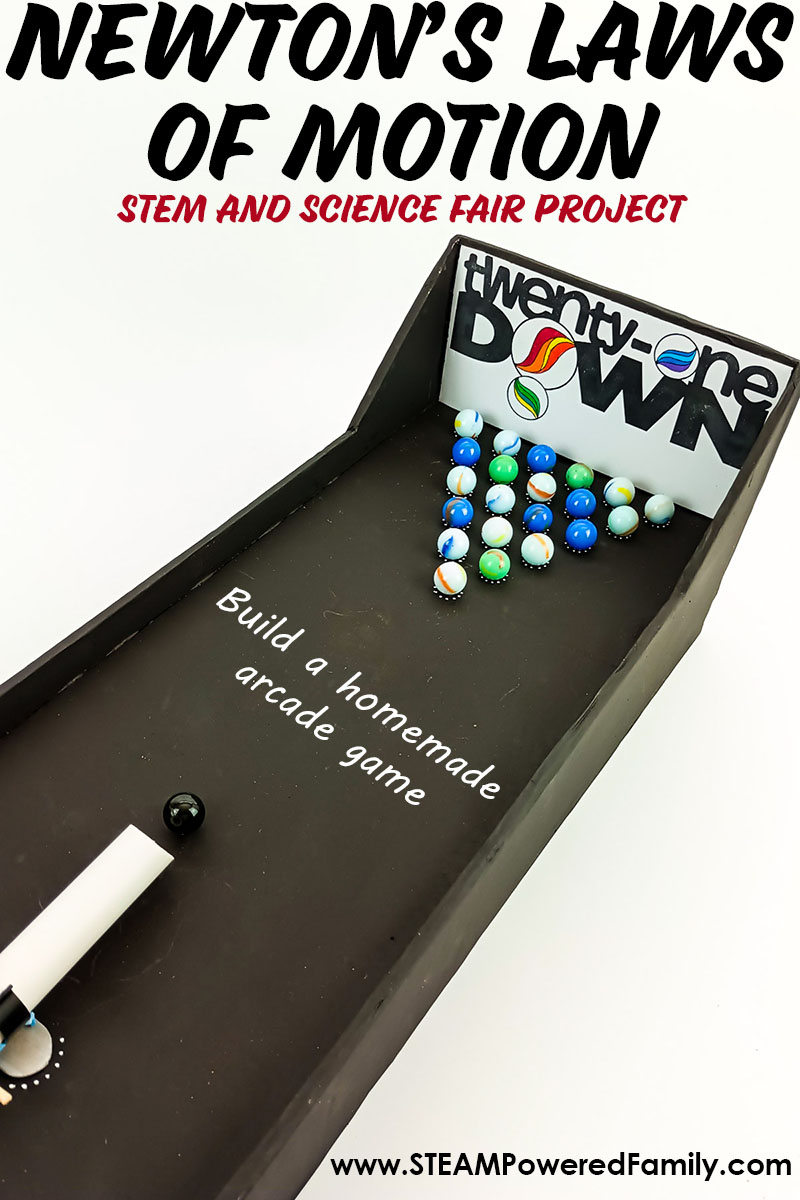 Strap on that genius cap, today we are walking in Sir Isaac Newton’s footsteps as we explore his Three Laws of Motion, then use that knowledge to build our very own Arcade Game. Powered, of course, by Newton’s Laws of Motion. This is a fantastic middle grade science fair project.

Who Was Isaac Newton?

I am sure that you know who Sir Isaac Newton was. He discovered gravity, right?
The story goes like this…an apple fell from a tree he was sitting under and supposedly hit him on the head. There is no physical proof of this happening to him, but it caused him to think long and hard about why the apple fell straight down and not sideways. This is how the Law of Universal Gravitation came about. Years after, he discovered other things about light, motion, mathematics, and more.

Learn more about Isaac Newton and other scientists our Famous STEMists Printable available in the STEAM Powered Family Shop.

This fun project will teach you about Sir Isaac Newton’s three Laws of Motion. You will build a marble game demonstrating these three laws, but first, let us look at each one.

Newton’s First Law of Motion states that an object at rest remains at rest, and an object in motion remains in motion at constant speed and in a straight line unless acted on by an unbalanced force.

This law means that any object that is already moving keeps moving unless something forces it to change its speed or direction. No net force acting on the object means the object maintains a constant velocity.

That also means that an object that is not moving (at rest) stays this way until an external force makes it move. This is known as Inertia, how an object can resist changes to its state of motion.

An example of this is a soccer ball lying on the grass. It is stationary (at rest) until it is kicked by a person, which makes it move (in motion).

Newton’s Second Law of Motion – Law of Mass and Acceleration

If you apply a force to an object, it will move and experience acceleration.

The second law states that the acceleration of an object is dependent upon two variables: the net force acting upon the object and the mass of the object.

Force is defined as equal to the change in momentum. This could be either a change in the magnitude or amount of force, or the direction of the force.

Force and mass work with each other. The greater the mass of an object, the more force it takes to move it. There is a simple rule for this:

An example of this is when you go shopping. The empty trolley is easy to push until it fills up and needs a lot more force, or momentum, to get it moving.

Newton’s Third Law of Motion – Law of Action and Reaction

For every action, there is an equal and opposite reaction.

If a force is exerted on an object, the object exerts an equal force in the opposite direction.
The fantastic thing is that the action and reaction take place at the same time.

An example is when a rocket is launched, and it fires out hot gasses with a great force which causes it to shoot upwards in the opposite direction thanks to opposite force.

My family love this game so much we had to give it a name – 21 Down! Give your game a name too.

One of the easiest ways to learn how to build your own arcade game is to watch us build ours! If you can’t see this video, please turn off your adblockers as they also block our video feed. You can also find this video on the STEAM Powered Family YouTube Channel.

How to make this fun marble game you will need the following:

First, you need the templates & cutting sizes document grab them with this form:

In addition to the templates you will need:

A large double-wall cardboard box or sheet
Brown paper tape
Masking tape
Twenty-one marbles
Glue gun & glue sticks
Screwdriver
Pliers
Side-cutter
Pencil
Craft knife
Scissors
An awl
Dremel or a drill
Sandpaper
Sellotape
Elastic bands
Wooden skewer
Wooden tongue depressor or jumbo craft stick
Plastic or metal Terry Clip that will hold the body of the shooter.
Small bolt with a nut that will fit into the hole on the Terry Clip.
A piece of 20mm / 0.787″ PVC tube or an old fat felt tip pen (a marble must easily fit inside it).
The plunger of a syringe (it must fit inside the tube you have chosen easily).

Getting your pieces ready

Print out all the template pieces and cutting instructions.

Copy all the measurements from the cutting page onto the cardboard and cut out all the pieces.

There are seven pieces in total.

PRO TIP! You may need an adult’s help cutting all the pieces as the hobby knife is very sharp!

Preparing the top piece for the marbles

Get the top piece and the template with the markings for the placement of the holes.

Stick the template at the top end of the cardboard and punch out all twenty-one holes using an awl.

Now using the lead end of a pencil, make all the holes bigger by pushing the pencil all the way through to the other side.

PRO TIP! Use a marble to test if the holes you just made are a good size.

Gluing the pieces together

Glue the two sides to the top piece, making sure you stick each side just under the line you drew earlier.

PRO TIP! It is important to glue the pieces in the place suggested, as this will allow them to fit together correctly.

You will notice that the sides are longer than the top. The longer side is for the tray, which catches the marbles.

Cut out and glue the logo from the templates onto the back piece with a glue stick. Put it aside and turn the “box” of the game upside down.

Glue the back of the marble tray to the underside of the end of the top piece.

Glue the front piece onto the front of the “box”.

Print out and glue the template with the logo to the back of the “box”.

Get your tube, syringe plunger, Terry clip, nut and bolt, wooden tongue depressor and elastic band to make the shooter.

From each end of a wooden tongue depressor or large craft stick, cut two pieces as shown below:

Make a mark in the center of one of the pieces.

Cover the top one with some masking tape.

Stack them on top of each other and drill a hole large enough for the bolt you have chosen to go through.

PRO TIP! You may need the help of an adult to do this step.

Cut one edge of the tube at an angle as shown in the diagram below:

Make sure that the syringe plunger fits easily into the tube.

Drill a hole into the back end of the plunger, big enough for a wooden skewer to fit snugly, about 3cm / 1.18″ away from the edge.

Ensure that the tube fits snugly into the Terry clip.

Make a hole for the bolt to fit through 9cm / 3.54″ from the bottom edge of the cardboard, as shown in the diagram below:

Glue the one piece of tongue depressor you cut earlier over the hole on the top, using the bolt pushed through it as a guide.

Turn the box upside down and glue the other piece of tongue depressor over the hole.

Remember to push the bolt through from the top to the bottom to line it up correctly.

Screw the Terry clip into the hole you just made and tighten it with the nut on the underside.

PRO TIP! Do not make the nut too tight, as you cannot swivel your shooter to get the shooting angle correct.

Slide the tube into the Terry clip and push the plunger into the tube.

You are almost done!

To finish off the game box, turn it upside down and finally glue the bottom piece to close the underside.

Use brown paper tape if you have any to neaten all the edges of the game.

This is the time to paint and decorate your game box. Have fun and be creative!

Load up your marbles and have some fun!

The rules of my game were simple: The winner was the first person to sink all twenty-one marbles in only three moves. You can make up your own rules.

You can create all different types of games, especially with varying marbles of colour. See how many kinds of games you can invent.

Now that you understand the Physics of this game, can you describe how it connects to Newton’s Laws of Motion?

Use the worksheet included with the templates and cutting instructions and see if you can complete the table.

Did you notice the marble shooter uses similar design aspects and physics as our Catapult Cannon!

If your shooter is not working correctly, here are some things you can check and adjust:

I hope you had fun making and using your new homemade arcade game and that you now understand all of Newton’s Laws of Motion. If you decide to use this project for your Science Fair tag us in some photos. We would love to see your arcade games!