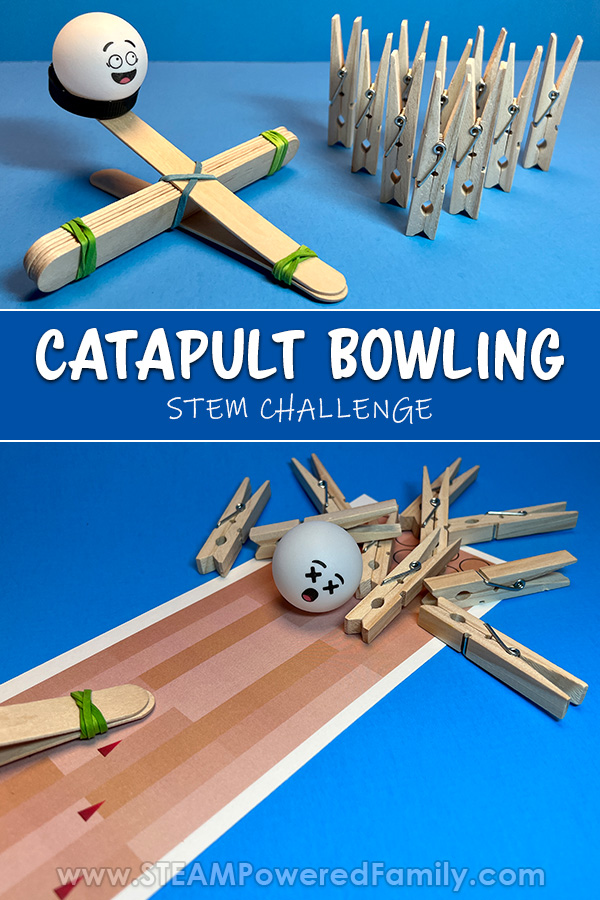 No bowling shoes? No problem! You can still hurl a strike with this mini catapult bowling game! Your challenge is to build a working catapult that can accurately launch a ping pong ball at a set of 10 clothespins. Can you knock down all 10 pins?

Ready to build your own game? Kids love bowling, and today we are going to build our very own mini-bowling game. Not only will kids engineering their own popsicle stick catapult for launching their ball, but they will have fun playing with physics as they find the perfect set up to hurl that all important strike!

Watch the video of this fun catapult project and game. If you can’t see the video, ensure your adblockers are turned off as they also block our video feed.

Before we get started, you can grab a printable of this project, that includes a printable bowling lane if you are a member of the STEAM Powered Family mailing list. Simply enter your email in this form to unlock the printable.

First, we need to create a “launching lever” by using a glue gun to attach a plastic bottle cap to the far end of a craft stick.

Next, place a second craft stick directly underneath the launching lever. Tightly wind a rubber band around the two sticks on the opposite end from where you glued the cap. This holds them together.

Take 7 craft sticks and stack them together. Tie a rubber band tightly around the far end of the stack.

Tie another rubber band tightly around the opposite, far end so that all 7 sticks are bound together. The rubber bands should be as close to the ends of the stack of sticks as possible.

Now, insert the stack of 7 sticks banded together between the 2-stick bundle. To make this combined structure more stable and less likely to shift while launching occurs, tie a rubber band in an X shape at the intersection of the 2 sets of sticks. An additional rubber band can be tied to the end of the 2-stick bundle to help prevent sliding.

Pro Tip! The closer the 7-stick bundle gets to the edge, the more leverage the catapult will have.

Adding additional craft sticks to the 7-stack bundle will change the angle of the catapult. Feel free to make design adjustments to get the perfect launch for your bowling game.

First we need to set up the game. Print out the bowling lane from our free printable pack, or you can go without. The choice is yours.

At the far end of the lane, set up the clothes pins to resemble the triangular shape of bowling pins at a bowling alley – 4 in the back, 3 in the row in front of them, 2 in the next, and one in the last.

Align your catapult and load it with a ping pong ball.

When you are ready, depress the end of the launching lever. Feel that potential energy building, then release the lever to launch the ball and “strike” your target!

If you wish, you can keep score, just like you would in a bowling game. Or create your own way of scoring.

This STEAM activity provides an ideal opportunity for elementary-aged students to participate in open-ended problem solving! Learners can build and manipulate catapults to learn about motion, the history of science and technology, and more!

This project explores a number of scientific principles.

Scientifically speaking, catapults are levers and the projectile (ping pong ball) is the load. But it is important to note, that catapults are more complicated than simple levers because catapults must throw an object rather than lift one.

All catapults rely on energy. That means a catapult stores energy, which is called potential energy, when you press down on the lever. Upon launch, that potential energy turns into kinetic energy. This energy is then transferred to the launched object, which sends it hurling through the air.

The task of building a working catapult to perform a specific task, (i.e., knocking down a set of clothespins) requires a lot of experimentation! Learning which angle of the catapult works best means the catapult must be launched several times, each one at a different angle.

The degree of each angle determines the amount of distance and height the ping pong ball will propel. The angle can be easily changed in this type of catapult!

First, if you want to change your angle, play with the amount of pressure you are using when pressing down on the lever. It may also help to use a finger on the base of the catapult to hold it steady while launching.

Second, adjust the stack of craft sticks in your catapult. Adding or removing will change the angles, which will result in different launches.

Finally, try something other than a ping pong ball. Find other balls and see how the difference in balls affects your results.

Create a target course where the catapult must be adjusted to achieve different heights and ranges when the ball is released. This is a great set up for a classroom, where kids can work their way through stations with different challenges, and test their catapult designs.

Use the catapult in your own unique carnival game!

Count the number of attempts and successful strikes on the target. This is a great way to introduce simple math into the challenge.

Construct and attach a mobile platform to the catapult.

Launch an object from the catapult multiple times and measure how far it travels each time.

Launch different objects from the catapult and measure how far each object travels.

Compare catapult designs by building more than one catapult and ensure you use variations in your design. Then, launch the same object from each catapult and measure how far it travels to evaluate how the design changes affected the outcome.

Beth Sommers is the STEAM Teacher at Newfields Elementary School in Newfields, New Hampshire, USA. She has a BSc in Nutrition & Food Science, Master of Public Health, Certification in K-8 Elementary Education, and is a graduate of Tufts University’s Engineering Education Program. She’s a certified teacher-trainer for Engineering is Elementary by the Boston Museum of Science and Project Lead the Way. She earned her STEM certification at Framingham State University in Massachusetts and attended the Michelson Exxon Mobil Teachers’ STEM Academy in New York City. Beth is passionate about integrative STEM education, Project Based Learning, and robotics. She’s provided professional development for teachers and presented at Ed Camps and conferences on Digital Engineering Design Notebooks, Technology for Teaching and Learning, and Robotics Education.