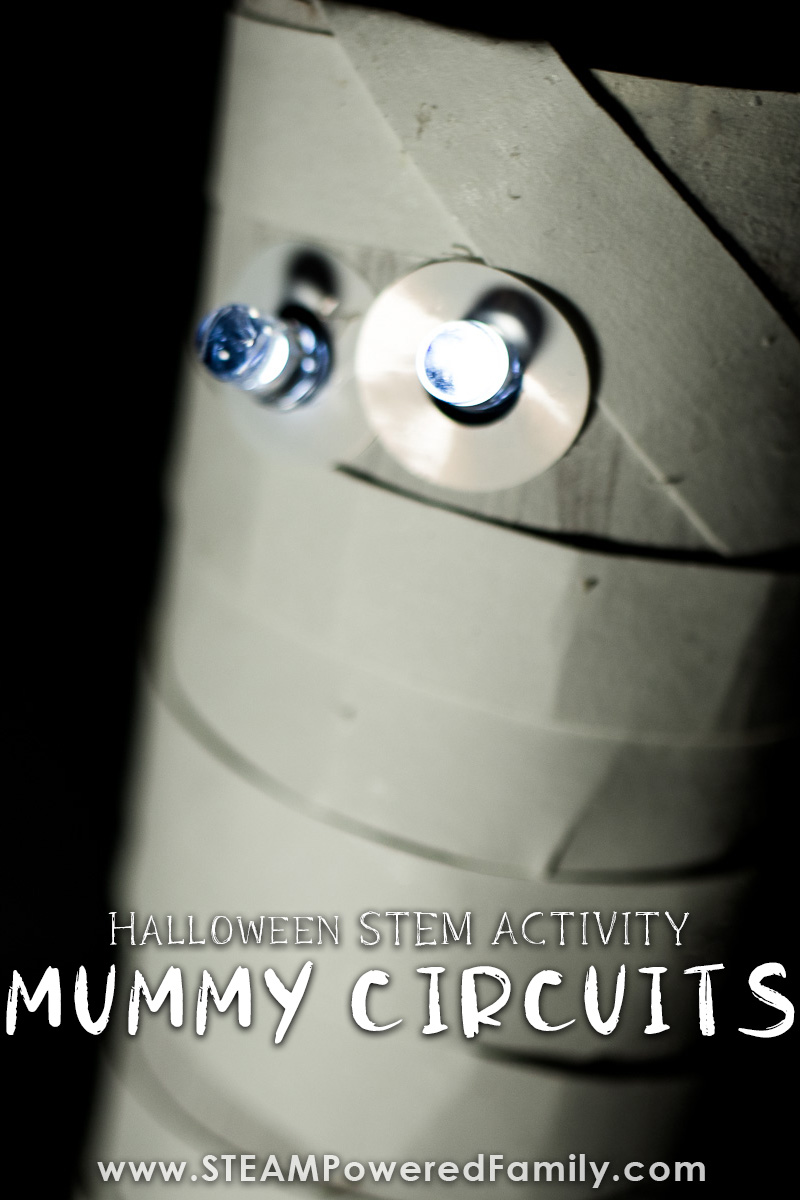 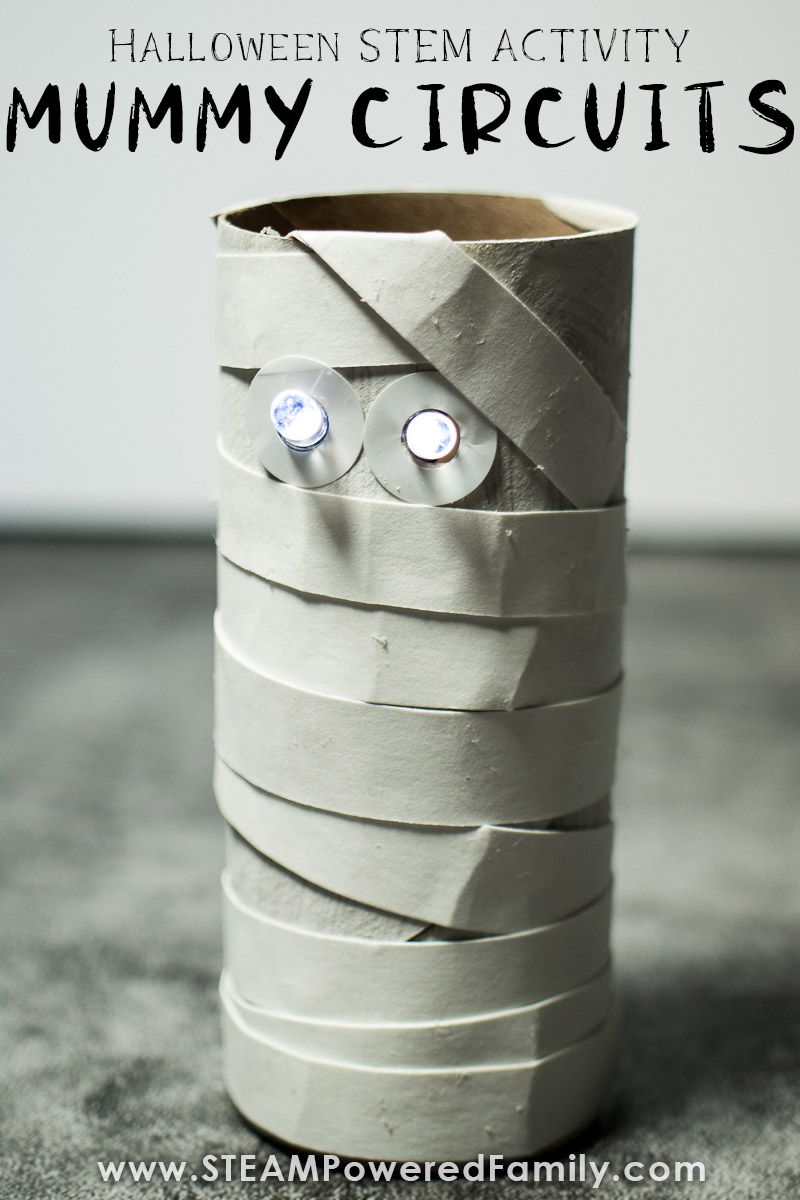 Halloween is one of our favourite holidays of the year. The kids get so excited and it is a fantastic time to embrace that enthusiasm and tackle new and exciting STEM projects each year. Today we came up with this incredibly easy and fun Mummy Circuit STEM Craft for Halloween. We are crafting and building circuits… fun!

A really simple and popular way to craft with kids is to use toilet paper rolls. Not only are they an easy to source material that helps us recycle as part of our crafting, but they lend themselves to all sorts of really cool ideas.

Which is how we created today’s project. Sure we could have made a simple Mummy Craft project for Halloween, but we wanted to power up our crafts.

And that paper toilet roll tube, with its’ hollow inside was perfect for adding in some circuit work.

So we took one of our original circuit creation ideas, the Circuit Bug, turned it on its’ side and made a Mummy Craft with eyes that glow. So spooky and perfect for a Halloween STEM Circuit Project. You can use these creations as decoration for your classroom or a Halloween party, or as a fun take home STEM project for the kids.

The Mummy is often portrayed as part of Halloween celebrations. So let’s learn a bit about the mummy.

Watch a video of us building this fun Halloween STEM Craft. If you can’t see the video, try turning off your adblockers as they also block our video feed. Alternatively, you can find our videos on the STEAM Powered Family YouTube Channel.

The first step is to paint the toilet roll white and let it dry completely.

Once dry we will decorate the TP roll to make our Mummy. First, use a hole punch to make to eye holes. I like to use the 2″ long reach hole punches, it makes the eyes more logically placed, but you can use a regular single hole punch if needed. The eyes will just be higher on your Mummy. Leave about 1cm between the eyes.

Place hole reinforcement stickers around the hole. These help secure the circuit LED’s in place.

Next cut strips of white paper and glue them onto the toilet roll to make the wrappings of your Mummy. You can do as many wrappings as you want. Make sure to angle some for a more authentic look.

To build the circuit you will need 2 prewired LEDs (one for each eye, we used white LED’s to make the eyes glow white for our Mummy), electrical tape, coin battery, clothespin, and scissors.

Always start by testing the LEDs and batteries. Even brand new LED diodes and batteries can come from the manufacturer with defects. There is nothing more frustrating than building a circuit only to discover something was wrong with your LED or battery before you even started.

Lights all lit up? Perfect, let’s move on to circuit building!

If your light doesn’t turn on, try switching the leads in case you mixed up the positive and negative. If it still doesn’t work, try a different LED and/or a different battery.

Once you have ensured everything is working, set the battery to the side.

Place the clothespin so the part you squeeze together is up. This is going to be the top where the Mummy’s eyes will attach.

Take an LED and place it pointing off the front of the clothespin. Tape the LED into place with electrical tape. Repeat with the other LED.

There can be quite a bit of wire, and it is important to keep things neat and organized. To do this, take the two negative leads and tape them together with electrical tape. Do it near the lights and also near the ends of the leads to keep everything neatly together.

Repeat with the positive leads.

Take all the leads and wrap them around the clothespin. Don’t do this too tightly. You don’t want to break any wires, plus you need to be able to still open and close the clothespin.

Using electrical tape secure everything into the place.

Pro Tip! If the light don’t come on, wiggle and move around the wires to ensure you have not broken the circuit somewhere.

Tape the leads to the battery.

Now open the clothespin and slide the battery inside being careful not to dislodge the wires. Close the clothespin onto the battery. This will help secure the connection. You can also add a bit more tape to secure things if you wish.

It is important to have the ends of all the leads securely in contact with the battery.

Now it is time to assemble our Mummy craft and get those eyes glowing!

Simply slide the whole circuit inside the toilet roll tube. Then carefully push the LED’s through the eye holes.

If the LED’s don’t line up with the eye holes, you can move them slightly to make it fit together better.

Your Halloween Mummy Craft with Circuit Eyes is now complete!

These Halloween Mummies make a fantastic decoration for a Halloween Party, or as a Halloween STEM activity for kids.

Get Batty with a Halloween Bat STEM Craft

A fun twist on this project is a bat version! Our Bat Craft with Glowing Red Eyes is spookily perfect for Halloween.