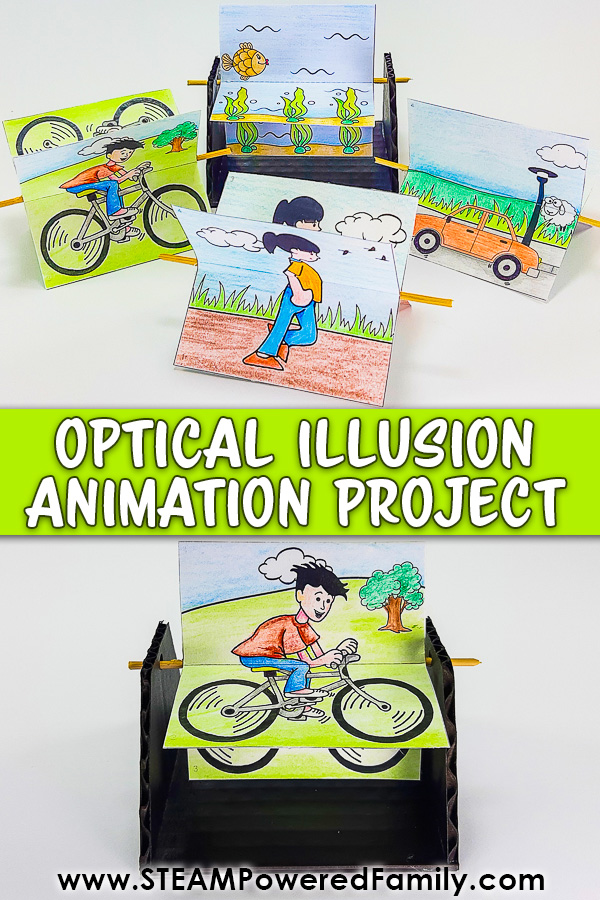 In this mindboggling project, you will make an Optical Illusion Toy. By making this optical illusion toy, you will learn, in a fun way, about how our eyes and brain make sense of our world. Students will learn about the history of optical illusion toys, how they work, the science behind visual illusions and animations, plus build their STEM skills.

We sometimes call optical illusions “a trick of the eye”, but it is not actually the eye that is tricked, it is the brain. The brain is tricked as it tries to make sense of the visual information it’s receiving. Fooled or not, seeing and creating optical illusions is fun for kids to learn about Optical Illusions.

What is an Optical Illusion?

Optical Illusions use color, light, and patterns to create images that can be misleading to our brains. The human eye interprets Optical Illusions by allowing the eye to gather all the information and then send it to the brain to be processed. This creates a feeling that what we are seeing does not match the image as we know it.

Watch as we make our special optical illusion toy. Below we have a list of all the supplies plus written directions, but often it is easier if you can watch the process. If you can’t see the video, please ensure all adblockers are turned off. These also block our video feed. You can also find this video, along with many others, on the STEAM Powered Family YouTube Channel.

How to make an Optical Illusion Flip Animation

You will also need our templates, which are available to all STEAM Powered Family mailing list members. Simply enter your email in the form to unlock the printable.

Getting your pieces ready

Lightly score the fold lines on each little picture with a screw or nail.

Gently fold the cardstock on all the lines inwards.

Gluing the pieces together

Start with the picture with the number 1 in the top left corner and the number 2 in the bottom left corner. Fold it closed and place it down on the surface you are working on with the wrong side facing you and the fold at the bottom (see the diagram below).

Take the second picture with the number 2 in the top left corner and the number 3 in the bottom left corner, fold it closed, place it down on top of the first picture in the same way, and glue them together.

You should now have the number 2 of both pictures glued together.

PRO TIP! Do not put glue too close to any of the folds. It will be difficult to push the wooden skewer through all the pictures.

Take the third picture and glue it to picture 2.

Finally, glue the fourth picture to both picture 3 and the back of picture 1.

Separate all 4 pictures so that it looks like a cross.

Do this with all your templates.

Let’s get the wooden skewers in place.

Cut the wooden skewers to 13cm in length.

Gently pull the pictures apart in the middle to make it easier to push the wooden skewer through without tearing the paper.

To hold the skewer in place, you may need to put a dot of glue on each end with a glue gun or white glue.

PRO TIP! Make sure that all the pictures are in the “cross” formation.

It’s time to get the stand ready.

Cut out the template for the stand on both the solid and dotted lines.

You should now have 3 pieces – a base and 2 side pieces.

Trace all three pieces onto the cardboard, making sure that all the dotted lines line up with the fluted side of the cardboard.

Make a mark through the template onto the cardboard for the holes on either side. You will need to punch out.

Cut out all 3 pieces and glue them together with a glue gun, making sure that you glue the sides on top of the base and not against the sides.

Punch the holes on either side.

You can paint the stand black or any other color you choose when you are done.

Now give it a spin and watch the magic happen!

How do you think it works?

What happens if you spin it in the opposite direction?

If you have not glued your pictures together in the correct order, you will not see the animation correctly. Always check that the number on the bottom left of each picture matches the number on the top left of the image before and after it.

The Science of Optical Illusion

Did you know that the brain and the eyes need to work together because the brain can’t see, and the eyes only process part of the picture? To make sense of everything, our eyes tell the brain what the things around us look like, and the brain then makes sense of what the eyes see.

Optical illusions use Persistence of Vision to fool the eye into believing that a series of still images, shown quickly after the other, is a continuous moving image. Optical illusions “trick” our eyes and our brain.

Persistence of vision is where the human eye holds onto an image for 1/30 of a second after it has disappeared. The eyes remember each image long enough to give us the illusion of smooth motion. An excellent example of this is a flipbook. When you flip the pages quickly, the brain remembers all the pictures it has just seen on each page, and it comes together as one smooth action.

Animators in the film industry use the Persistence of Vision and the phi phenomenon, which suggests that showing still images quickly, one after the other, can create the illusion of movement.

What is Science Art, and how does it create the unique visual experience of Optical Illusion?

One of the most natural needs of humans is to understand the world around us. Both science and art are human attempts to understand and describe what we see.

Science art is inspired by science and made easier to visualize and understand by art. Science is technology, and art is decoration. Technology and decoration make life easier and help us understand the world around us.

This is where the importance of STEAM work comes in. STEAM stands for Science, Technology, Engineering, Arts and Math. Unlike STEM it includes Art. At their core, art and science are both about observation and interpretation. Whether it is by using scientific data or technologies such as AI and VR to create art or by using art to understand and communicate science, both work hand in hand. Which is why we feel STEAM is so important for students!

The History of Animation, Optical Illusion, and Persistence of Vision

The history of Animation dates to ancient times. From the pottery of the ancient Greeks in 1000 BCE to the ocular toys of the 17th century to the computer-generated imagery of the 21st century, Animation has existed in many forms, evolving into the exciting world of Animation we see today.

Persistence of Vision was first discovered by an English doctor, Peter Mark Roget, in 1824. He found that the human eye and brain can hold onto an image for a fraction of a second after disappearing.

In 1876, Émile Reynaud of France used the science of Persistence of Vision to project animations on a theater screen.

Many nineteenth-century Optical Illusion toys excited the people playing with them by creating the illusion of motion from still images. These included the phenakistoscope, a spinning cardboard disk that created the illusion of movement when viewed in a mirror, and the Zoetrope, a rotating drum lined by a band of pictures that could be changed.

Other examples of early animation devices:

Throughout history, there have been many devices and toys capable of animating scenes of cartoon characters, people, objects, and events:

Thaumatrope: An optical toy that featured a picture disk held by two strings. When the strings were twirled, they would spin the disk, making the images on either side look like one image.

Kineograph: Latin for “moving picture.” A small book of drawings, with each page showing a different form of movement, so when the pages are flipped quickly in sequence, they animate a scene. The kineograph was also known as a Flipbook.

Praxinoscope: This device came after the Zoetrope. It had an inner circle of angled mirrors instead of vertical slits, which helped provide a more precise and vivid animation.

To learn more about the Human Eye, check out our printable unit study in the shop.