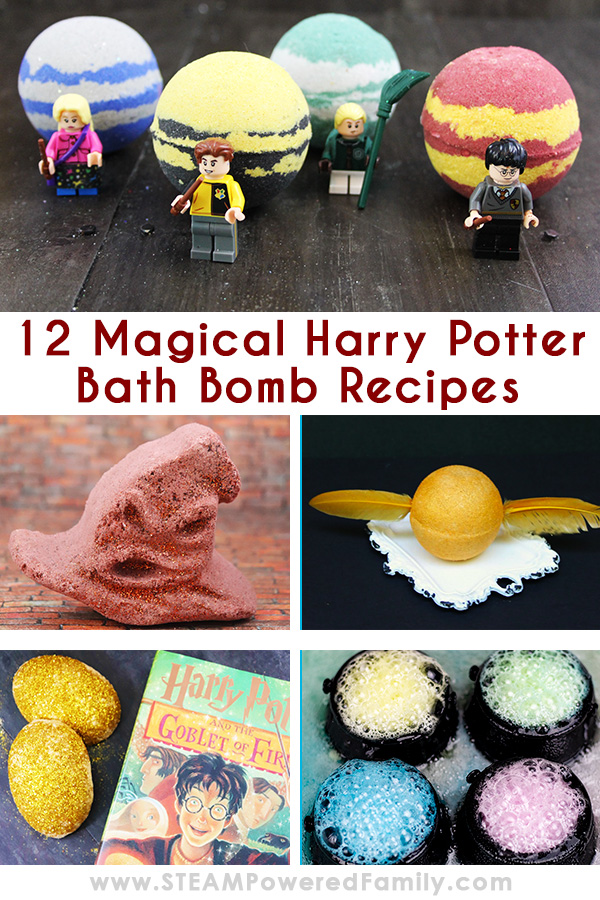 Who doesn’t love a great Harry Potter project? Lately we have been obsessed with making our own bath bombs. The science behind them is a brilliant chemistry potions lesson, plus they are so much fun to make and use. Combining our love of Harry Potter and Bath Bombs has been an amazing journey for us and I love sharing these bath bomb recipes with you! So grab your broomstick, all Muggles and Wizards welcome, as long as they love all things Harry Potter!

It’s kind of funny how the ideas build on themselves around here. I’ve been a HUGE fan of Harry Potter ever since I read Sorcerer’s Stone in 1999. About 5 years ago I started reading aloud the book to my kids. If I remember correctly, I got about 3 chapters in before my oldest, who was 7 at the time, took the book from me and devoured the whole thing in 3 days. He then went on to read the entire series three times over.

To say we are Harry Potter fans around here would be a massive understatement.

I love making lessons and projects more interesting by giving them a theme. Since the very beginning of our bath bomb making journey, integrating Harry Potter inspiration into our bath bomb recipes has been a recipe for magical fun!

The best part is that the science behind bath bombs is fascinating and has lead to some really great experiments and discussions as we make these fun treats.

Now a few of these started out with one inspiration, but over time have taken on a new Harry Potter themed inspiration. Sometimes I write the articles using a non-Harry theme, but today I am sharing our magical interpretations of some tried and true bath bomb recipes!

Ready to try your own Harry Potter Bath Bomb making adventure? Check out these 12 magical bath bombs you need to make with your young witches and wizards.

It will come as no surprise to most of you, but the most popular house bath bomb with our STEAM Powered Family readers has been Gryffindor. Harry, Ron and Hermione all belong to Gryffindor, so it is the Hogwarts House we all become the most familiar with through the stories. If you identify with Gryffindor, here is your bath bomb!

Hufflepuff is the Hogwarts House that is home to Newt Scamander from Fantastic Beasts and Where to Find Them. I’ve always felt that those in Hufflepuff were the truly kind wizards. The ones with a heart filled with goodness. And who doesn’t need a little bit of that in their day? If you belong with the Hufflepuffs, here is your bath bomb recipe.

I’ve always felt a strong affinity for the Ravenclaw house and feel the Sorting Hat would have sorted me into Ravenclaw. It is said Ravenclaw house students favour wit, wisdom and learning. There is nothing more powerful than a lifelong love of learning, so it’s no wonder I love Ravenclaw! If you feel drawn to Ravenclaw like I do, here is your bath bomb recipe!

Not sure which Hogwarts House you belong to? No problem! These Cauldron Bath Bombs include a house reveal and are so easy to make. Young witches and wizards will love brewing up this simple recipe that comes packed in a cute little cauldron so you can take your bath bomb and go! Perfect for a Harry Potter bath bomb making party or as a gift for your favourite Potterites.

We love our Cauldron Bath Bombs that have a house reveal, but we also wanted a bath bomb that looks like the Sorting Hat, so here it is! Complete with Butterbeer scent that smells as good as if it was brewed by Madam Rosmerta herself.

Quidditch is the sport of witches and wizards which has them racing through the air on broomsticks. The most important part of a Quidditch game is the Golden Snitch. It is the Seekers job to catch the snitch which gives there team 150 points and ends the game, often with that team winning. Harry Potter ends up landing the coveted role of Seeker on Gryffindor’s team and helps lead them to victory many times. Enjoy your own special snitch with this gorgeous Golden Snitch bath bomb recipe.

When Harry meets Ron for the very first time on the Hogwarts Express in the movies, there is this hilarious scene where Harry opens a Chocolate Frog candy treat for the first time. It then promptly leaps from his hand and out the window. Harry is shocked while Ron stays calm, as if he has seen this a thousand times before. And he probably has! These Chocolate Frog bath bombs capture that magic in a fizzy, fun, chocolate scented bath time.

In the Triwizard Tournament, one of the most iconic items was the Golden Dragon Egg that Harry had to rescue from a Hungarian Horntail dragon, then figure out the puzzle. Just like in the story, these Golden Dragon Egg bath bombs share their magic underwater! But no singing this time, just a wonderful, golden fizzy bath with a wonderful bubble bath follow up. I love this bath bomb recipe so much!

This is such a fun bath bomb! Not only does it LUMOS (glow in the dark), it also has a very spooky, Hagrid approved surprise inside, a baby Spider! In the Chamber of Secrets Hagrid revealed that he has a pet living in the forest named Aragog, a rare giant spider known as an Acromantula. Now we couldn’t fit a giant spider in here, but perhaps one of Aragog’s offspring is hiding inside waiting to erupt from the bath bomb!

This bath bomb is another one that did not originally have a Harry Potter theme, I simply wanted to make an activated charcoal bath bomb, but once we started using them my kids commented that the swirling black water was like a Dementor flying about with their swirling, ratty robes. Making this the perfect Dementor bath bomb!

There is something about the winter scenes in Harry Potter that make them even more magical. In the movies, those shots of Hogsmede in the snowfall are some of my favourite moments. Although I didn’t originally call these Harry Potter inspired bath bombs, they were! I came up with the idea of this bath bomb after seeing the wintery and Yule scenes in Harry Potter and the Goblet of Fire. I wanted something with shimmering silver, dripping icicles and the sparkle of a fresh snowfall. Just like in the movie. I think we nailed it with this gorgeous bath bomb.

While in Hogsmede you have to stop for a delicious glass of Butterbeer from the amazing Madam Rosemerta! Embrace that delicious treat with this wonderful smelling Butterbeer bath bomb recipe. It’s simply magic!

I hope you enjoy these truly magical bath bomb recipes inspired by the world of Harry Potter!