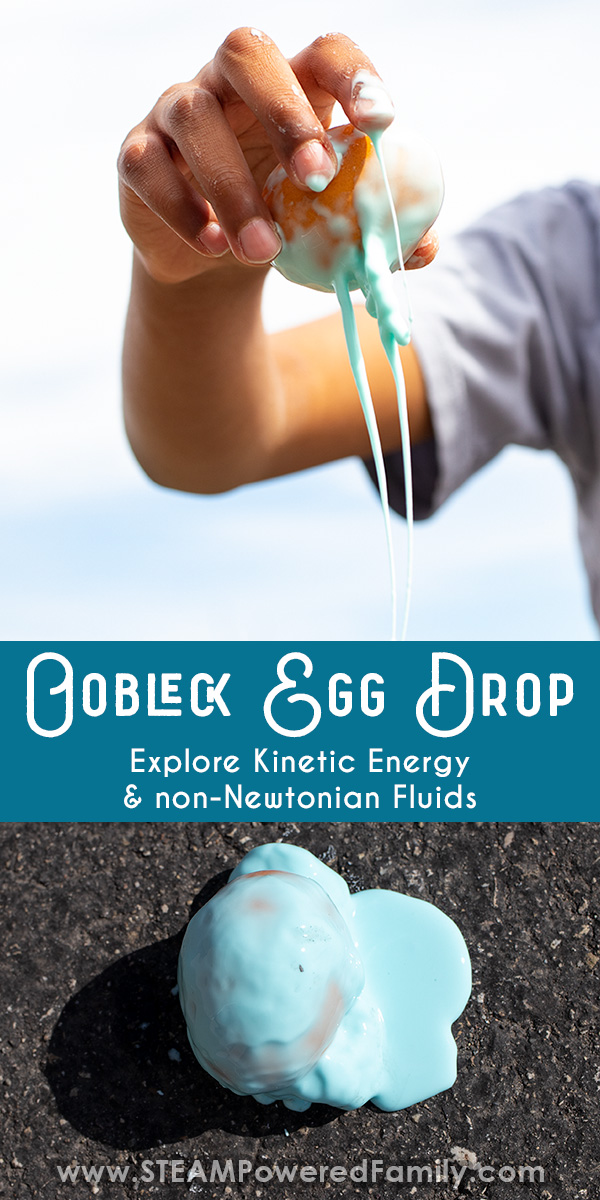 We love Oobleck around here. The non-Newtonian Fluid is fascinating and teaches us so many lessons along with providing a wonderful sensory experience. So after all this time playing with Oobleck and observing it’s properties, we had an idea… could Oobleck protect an egg from breaking in an egg drop challenge? That question turned into a fun day, outside, doing our Oobleck Egg Drop Project!

Can Oobleck protect an egg from breaking?

I love child led investigations and experiments. They always lead to the coolest projects. In this case we were discussing doing an Egg Drop experiment. Something we had never done before. After some discussion one of the kids asked, “Do you think Oobleck could protect the egg in an Egg Drop and prevent it from breaking?”

That started the wheels turning! So now we had our question, it was time to work through the Scientific Method and see what we could discover.

This project would also make a great Science Fair Project!

Egg Drop Without Breaking the Egg

The goal with an Egg Drop Project is to drop an egg from a certain height and see if you can build or create something that will prevent it from breaking. Usually this involves engineering a contraption to protect the raw egg. Often with parachutes, padding, popsicle sticks and maybe even some bubble wrap.

We don’t like going with the obvious, so instead we wondered if we could use science to protect our egg. Specifically a non-Newtonian Fluid.

It was time to use some creativity and put our critical thinking and problem solving skills to the test!

And it was so much fun!

Oobleck is a non-Newtonian Fluid that can be created using items from the kitchen. We have made it using Cornstarch, Tapioca, Potatoes, Arrowroot and even Baby Powder. You can see a comparison of the Oobleck recipes here.

Oobleck is fascinating because it doesn’t have a consistent state of matter. When pressure is applied it becomes solid, and when pressure is released it turns liquid.

Fluids normally behave in a predictable pattern. This behaviour was described by Sir Issac Newton in his Law of Viscosity. Fluid dynamics are commonly known. Even a child can tell you that a thick mud or syrup will flow slower than clean water. That change in flow is caused by friction between molecules. More molecules equals more friction, which equals slower flow.

But not in non-Newtonian Fluids like Oobleck! Oobleck behaves like play dough and becomes quite solid under pressure, but release that pressure and it becomes a liquid and flows. This phenomenon is called “shear thickening” and it occurs in materials made up of microscopic solid particles suspended in a fluid. Oobleck therefore is a suspension.

Want to learn more about the science of Oobleck? Check out this Oobleck Science Fair Project.

Oobleck Egg Drop Project – How we did it

Our experiment was actually very easy to set up and do. First of all, I HIGHLY recommend doing this outside. Although we used plastic bags to contain the mess, the chance of things getting messy is very high.

To do this Oobleck Egg Drop Experiment you will need:

Oobleck (we made our Oobleck cornstarch recipe this time – water and cornstarch)
Cornstarch
Water
Food colouring (optional)
Sealable plastic bags
Twist ties (optional, but we did use them)
Eggs
Step stool or ladder (optional)

You could easily use one of our other recipes if you don’t have cornstarch. Potatoes, tapioca, arrowroot and even baby powder will work.

We removed all the air from the bags and zipped them closed, then we twisted them so there was less room for the egg to move around in the bag and secured them with a twist tie.

Then we went outside and dropped them!

The egg in a bag with water – broke.

Sigh! We thought that one might have some success, but nope!

The egg in a bag with cornstarch – broke.

The egg in a bag with Oobleck – survived! In fact it actually BOUNCED!

We repeated the experiment over and over again with the Oobleck and each time the egg just bounced upon landing. Oobleck allowed us to drop the egg without it breaking! Even with repeated drops.

How Does Oobleck Prevent an Egg Breaking?

The impact from Oobleck hitting the ground causes it to change states from liquid to solid, then back to liquid again once it lands. The movement of kinetic energy during these changes in states can be seen if you watch oobleck closely while playing with it. It is visible as a bit of thickening that moves up the Oobleck as you let it drip. Watch closely and you will see it as you play.

So what causes the egg to break in the first place?

That’s where our amazing Oobleck comes in!

The kinetic energy on impact is what breaks an egg in a egg drop experiment, but since the Oobleck takes on that kinetic energy it protects the egg from breaking.

OK, so our Egg Drop experiment with Oobleck was a HUGE success but now we wanted to push things and see how far we could go with this and how much the Oobleck could protect the Egg.

First, my teen took the Oobleck and egg in a bag and threw it as hard as he could rather than just letting it drop. This kid is strong and has a wicked arm. Sure enough the egg broke. So now we know there are limits to how much kinetic energy the Oobleck can take on impact and protect the egg.

Next we decided to return to our normal Egg Drop, but this time with the egg covered in Oobleck but not in a bag. We used quite a bit of Oobleck in our bags, and we were curious how much Oobleck would be needed to protect the egg from breaking.

Turns out it worked! Within limits. If we dropped it from under about 6 feet the egg would not break, instead bouncing like a ball on impact. But if we went above 6 feet our egg broke.

Such a cool result!