We love robots! When Jackson was little he used to say he wanted to be a Robot Repairman when he grew up. That started an ongoing obsession with technology, programming and robots! We’ve have a lot of robots and it seems to be the one collection that keeps growing. I’m sure we aren’t the only family with robot obsessed kids so I thought I would share a few of our thoughts on various robots we’ve had over the years. Here are our thoughts on the robots in our collection. Enjoy our robot reviews! 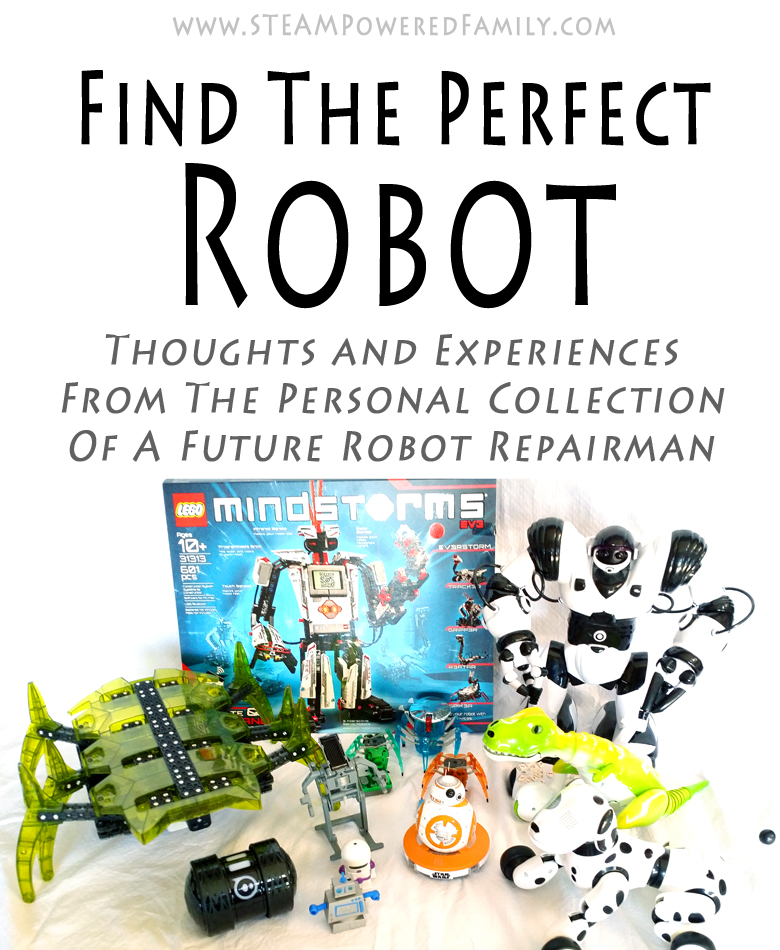 One of the first things about robots is that there are really two categories. There are your robot toys. They come fully built with a controller and pre-programmed commands. You basically control it and make it run around and do your bidding. These are really fun, quick and easy to use. Many of them can be used by pretty much any age and technical ability.

The next one is the kits where you are actually building and sometimes programming your robots. These are intensive and time consuming. It could take hours and hours of work before you have even the most basic of robot. But, for people who love a challenge, enjoy programming and love creating, these are fantastic.

So based on those two categories, here are a few robots in each one that we personally own and our thoughts on each one.

Darkside Ollie Sphero – For my son’s 7th birthday we bought him Darkside Ollie Sphero, there is a white one as well, but my son loves the colour red, so we went with the dark one which is red and black. Made by the same company as BB-8 this is a cross between a robot (he can do tricks), and an RC car. My son loves RC cars but most of the year we can’t play with them outside so I wanted to get him something he could play with in the house. This fits the bill perfectly. And it is really FAST!

Sphero BB-8 – When I saw a video for this little guy I knew immediately we had to have one. He is just sooooo cute! He is somewhat limited in his functionality but really he is all about the cuteness and playing. Which he does really well, you can see our review and videos here. We love pulling him out and with all the excitement around Star Wars right now I expect he will continue to be a favourite for some time.

WowWee Robosapien X Robot – We have had two of these robots for about 3 years now. They have survived a LOT of abuse and just keep on trucking. When we have company over, no matter the age of the kids, I know we can pull out these robots. They don’t move fast, so they don’t trip anyone or scare more sensitive children. The remotes are just complicated enough to keep kids occupied for a long time, in fact while writing this post I had it out and my kids discovered some new ninja actions it can do. And they dance and fart. So yeah, a big hit around here and highly recommended for the young robot fans. Lots of great play value.

Zoomer Dino – This was a robot that hits my son’s love of robots and dinosaurs perfectly. It still comes out to play regularly after a year in the collection. It’s a little weird when it gets “angry” and it’s eyes flash red and it starts to charge about so I have to watch for more sensitive kids because of this, but most kids think it’s really funny. It does require re-calibrating quite often so it can stay balanced on the two hind legs, but now I’ve taught my kids how to calibrate it, they take care of it all themselves.

Zoomer Dog – We actually have the dog and the puppy. This toy collects a lot of dust. I’m not entirely sure why, but of all our robots this one has been the biggest flop. It’s just not engaging enough for my boys, and the voice commands tend to be quite hit or miss. For the right person this might be a beloved toy, but in our home this one was a bit meh. The smaller of the two dogs is actually not a robot at all, it’s a game console in the shape of a dog.

Zibits – This are almost impossible to find in Canada, so for a few years we would always buy some on our trips to the USA. The kids love playing with the Zibits. They are little pocket sized toys you can zip around the room. They don’t do much but they are very entertaining according to my kids.

Hexbugs – There are many different types of Hexbugs and from a look around they seem to be the “new” Zibits. Some of them have remotes, making them a bit more robot like. Overall my kids seem to be fascinated by them and they often come out to play. These toy Hexbugs are not to be confused with the VEX Hex Bug Robotics kits, which I will discuss below.

Now onto the kits! Most of the kits are designed for older kids and will require quite a lot of work, patience and skill to build a functioning robot. We are just starting to really get into these types of kits, but here are a few we have. One thing to note, all of these require assembly but not all are programmable.

Solar Robot 4M Kit – We got this kit as a Christmas present and my boys think it looks really cool but it doesn’t do much. It needs intense direct sunlight to work and has to be outside. It also moves sooooo slow!! I have a video up on my Instagram if you want to see it. So slow!! It was also difficult to assemble. It doesn’t come with a controller and is not programmable, but is very inexpensive and a cool little introduction to solar power.

Hexbug Robotics 4 in 1 Kit – This kit was a real let down. We thought we could build 4 robots. Nope. You get the brains and a controller for one robot, but all the gears and plastic bits to build 4 different types, BUT to build any one robot, you need to dismantle the first robot as lots of the parts are used across the four different types. But unlike Lego Mindstorms which comes apart easily, the plastic bits in this kit will break with repeated assembly and dis-assembly. If you are going to do Vex Hexbug Robotics, just pick one design and buy that specific kit. It was quite a disappointment to spend quite a lot of extra money on this kit only to discover all the limitations. Plus, it’s not programmable. So after all the work of putting it together it had limited ability to hold the interest of my kids. It’s really big!

Mindstorms – This was the penultimate for my son for years. Since he was 3 years old he has been asking for Mindstorms. We waited, the box says it’s for 10 years old and up, but on a trip to Legoland when he was 8 he attended a Mindstorms workshop and blew everyone away with his ability to program the kit and complete challenges. So for his 9th birthday we bought him Mindstorms, but here’s the thing, my son LOVES programming, but he is really not into spending hours building the robot, so we are kind of stuck in the middle at this point. He wants programmable but doesn’t really want to do a lot of complex builds, and this is by far the most complex Lego build my son has ever done, it is quite intimating for him. Still a great buy, and I think a must have for any robotics fan as this is the beginning of true robotics work with the builds and programming, but it was an interesting discovery. My plan right now is to do the build as a family, then he can start programming.

Another robot that we don’t own, but I’m thinking may end up under the Christmas tree is Sphero SPRK. It doesn’t require assembly but it is programmable, so it’s like a cross between the two categories. I think it might be a great fit for kids that are at the stage my son is at, they want to program and get the robot to do complex challenges, but they don’t necessarily enjoy building.

I hope you enjoyed our Robot Reviews and it helps you find the right Robot for your little future Robot Repairman! We definitely don’t have every robot available, so if you have a great robot, I would love to hear about it in the comments.