Dysgraphia is a condition that makes it difficult to write and at times actually painful. My oldest struggles with dysgraphia, and with a mind that is constantly hungry for knowledge and learning I’ve had to get creative in finding ways for him to demonstrate his knowledge without increasing his frustrations and struggles. Learn one of our favourite ways to successfully overcome the frustrations of dysgraphia while learning. 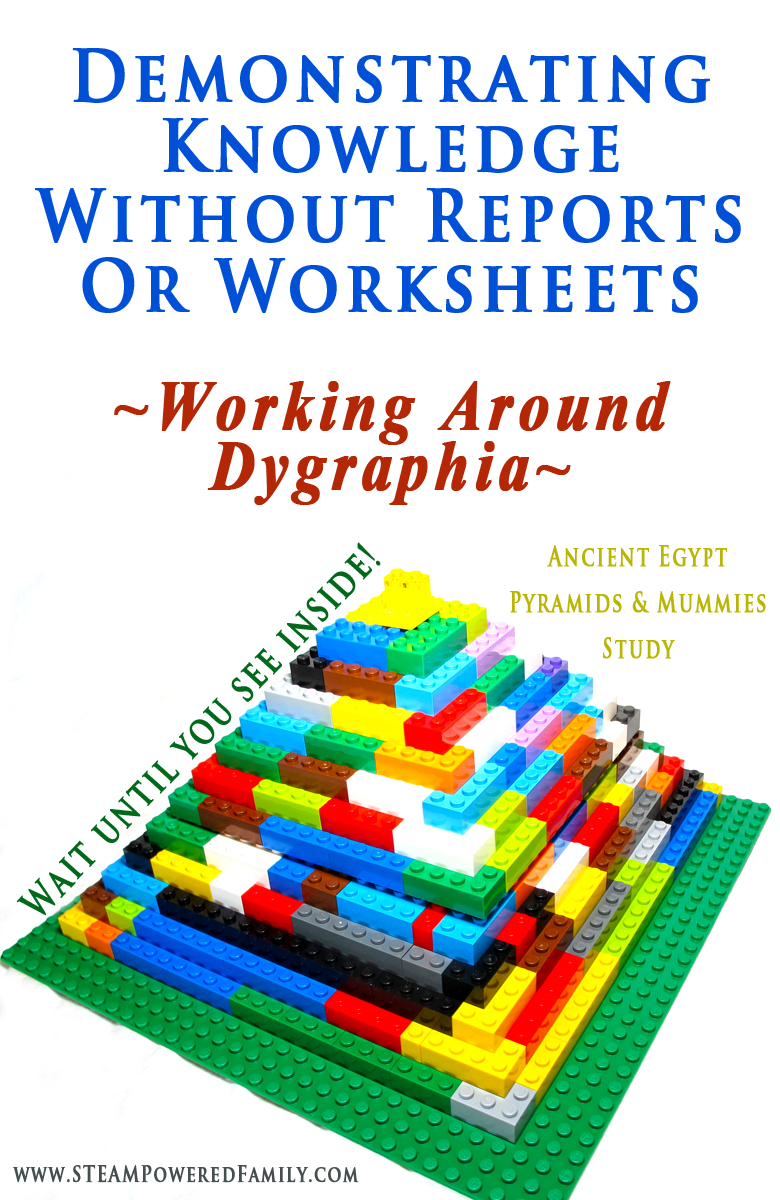 We are currently studying Ancient Egypt and the scholar in me immediately jumps to the idea of report writing. That’s what I did in school, we studied something and wrote a report on it. When I was younger those reports were shorter and scribed by hand, as I grew my teachers slowly relented and let us submit type written reports.

But then I started homeschooling my son who struggles with dysgraphia. He is also gifted. I’m sure some of you can understand his frustration with a mind that is racing at a mile-a-minute but a hand that can barely form letters, and only does so with intense focus and a great deal of time. His hand simply can not keep up with his mind.

It’s extremely challenging for him. And me!

So in our homeschool we get creative. We are doing a number of things to help him with the dysgraphia such as cursive and typing, but since we homeschool we don’t need to do report writing to prove knowledge, we can get creative. And getting creative is so much more fun and meaningful!

So while studying Ancient Egypt we have made cartouches, we conducted mummification experiments, and finally had him demonstrate his knowledge of pyramids and Ancient Egyptian burial practices by using Lego.

While building his structure I had him explain to me why he was making the choices he was and why certain things were included.

At first he was quite upset that we only had brightly coloured Lego, he wanted grey or brown bricks to build the base of the pyramid and white to make the limestone coating that went over top. Once he was talked off that ledge, he had a lot of fun creating his own little pyramid.

As he was building he discovered that he would need supports for the walls or the Lego pieces kept falling apart as he built it higher. He had some great insights into how this might have created challenges for the Egyptians building the actual pyramids.

Then he realized that he needed to make it so we could see inside the pyramid. So he designed it with a removable top. This took a little extra engineering and focus on the design process.

Inside he built a sarcophagus. He didn’t want to make the face so instead he placed a skeleton inside (closest he had to a mummy), and used a special open brick so you could see the face. I thought it was a good compromise.

Then he added the horse as the Egyptians were often buried with their prized animals.

Finally he added some gems and goblets and other little precious items and treasures that would have been included in a tomb.

He talked about how there had to be no entrance to protect the tomb from thieves.

Overall a great build that worked on fine motor, engineering, design process, plus his understanding of Ancient Egyptian pyramids and burial processes.

The key in using this type of project is to have the child talk through their choices. Not only does the build itself demonstrate knowledge but talking through things can bring about greater revelations and more in-depth processing of the information. Essentially the child is now teaching the teacher which is a fantastic way to learn.

Oh and if you need a recording of the knowledge for grading purposes, video tape the child explaining their build! Learning presentation skills is very important, and no one can deny the popularity of videos in today’s world. Doing a visual report is a great learning tool. I still want to get into report writing, and after all this fantastic hands-on exploration and learning I think my son will feel much more confident writing a report.

I will let him type it up though.

I hope this helps anyone else teaching a child struggling with dysgraphia or other fine motor writing delays.