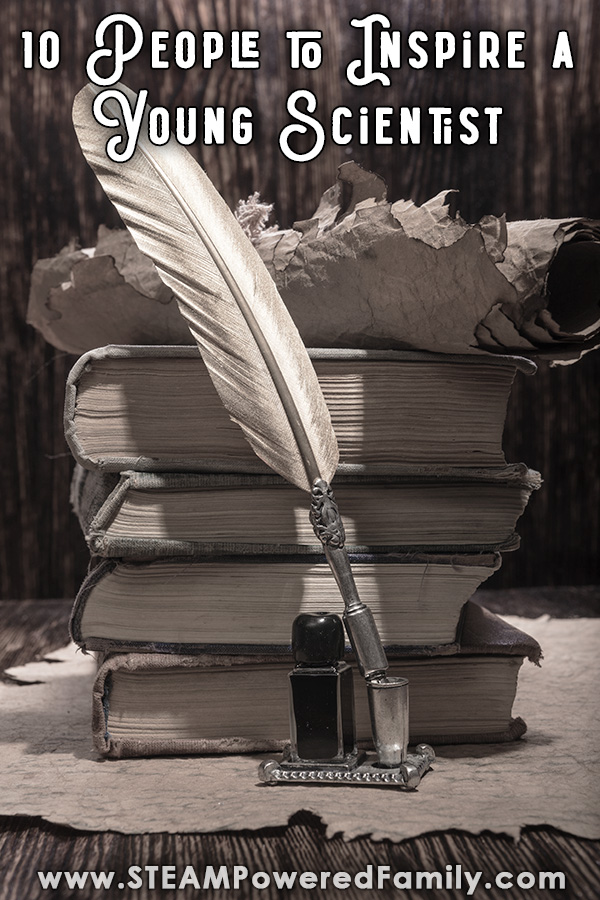 To become great in a chosen field, one must possess a certain determination and perseverance against what can often feel like insurmountable odds. It takes incredibly hard work and resilience to succeed. Something that I want my future scientist to understand and embrace. Sometimes it is about the journey to discovery, more than the actual discovery. The best way to understand the struggles great scientists face, is to learn about the lives of great scientists from history. Here are some amazing people to inspire your scientist.

10 People Your Future Scientist Needs to Know About

Recently we shared a resource titled, 10 Unique Things Your Future Scientist Needs in Their Life, which detailed 10 out-of-the-box ideas that foster joy in science and enrich a child’s education.

Over time, it has become evident that the best way to encourage passionate pursuit of big goals, is to have a mentor or role model. Someone that came before and can inspire a person during their difficult times. It makes a person feel less alone, and gives them hope. That’s why I feel strongly that doing in-depth studies of scientists and inventors is so important for a future scientist.

It’s About the Stories

People connect with stories. They connect with people. Our kids do too. By exploring the lives and discoveries of scientists who had big impacts on our scientific community, children can develop connections with these great minds. Drawing on those connections as needed to energize themselves.

Other than providing inspiration, the most profound effect of learning about great people is that these men and women teach kids to never give up. One characteristic that can be found in the personality and behavior of almost every successful scientist or inventor is perseverance.

When a child is faced with obstacles, they can reflect on the obstacles other great people faced, yet overcame with grit and determination. This can give them the boost they need to get through the hard times.

Inspire your future scientist with these 10 incredible giants in science. Their considerable achievements are sure to ignite passions and curiosity in your child.

Archimedes was born in Sicily (which at the time was part of Greece) around the year 287 BC. As a mathematician, physicist, engineer, inventor, and astronomer, he was the original Renaissance man. His work is considered to be far ahead of his time. Archimedes invented the science of mechanics, the laws of levers and pulleys, the concept of the center of gravity, he calculated pi, invented the Archimedean Screw, and invented war machines.

“Give me a lever long enough and a fulcrum on which to place it, and I shall move the world.” -Archimedes

Leonardo da Vinci was born in Italy in 1452. He had vast interests that included inventing, painting, sculpting, architecture, science, music, mathematics, engineering, literature, anatomy, geology, astronomy, botany, writing, history, and cartography. He has been called the father of architecture and is considered one of the greatest painters of all time. Another mind, far ahead of his time, he is credited with inventing the parachute, helicopter and tank.

“It had long since come to my attention that people of accomplishment rarely sat back and let things happen to them. They went out and happened to things.” – Leonardo da Vinci

Galileo Galilei was born in 1564 in Pisa, Italy. He was an astronomer, physicist, engineer, philosopher, and mathematician. He played a major role in the scientific revolution during the Renaissance. Galileo has been called the father of astronomy and physics. His most noted accomplishment was the improvement of the telescope.

“I do not feel obliged to believe that the same God who has endowed us with sense, reason, and intellect has intended us to forgo their use.” – Galileo Galilei

Johannes Kepler was born in 1571 in the Stuttgart Region of Germany. An astronomer, he is recognized as the founder of celestial mechanics (planetary motion). He also discovered that the tides were caused by the moon, and used stellar parallax to measure our distance to the stars.

Sir Isaac Newton was born in 1642 in Lincolnshire, England. His name is one of the most recognizable names in the scientific field. A mathematician and physicist, he discovered the laws of motion, the law of gravitation, and the field of calculus. His contributions to astronomy were vast, including discovering the colors of sunlight, and inventing a reflecting telescope.

“To myself I am only a child playing on the beach, while vast oceans of truth lie undiscovered before me.” – Sir Isaac Newton

Louis Pasteur was born in 1822. He was a French chemist and microbiologist. Best known for his discoveries of the principles of vaccination, fermentation and pasteurization. His work lead to incredible breakthroughs in understanding the causes and prevention method of diseases. His discoveries have saved countless lives and lead to longer life spans. He reduced mortality from puerperal fever, and created the first vaccines for rabies and anthrax.

“When I approach a child, he inspires in me two sentiments; tenderness for what he is, and respect for what he may become.” – Louis Pasteur

Thomas Edison, born in Ohio, USA in 1847, was an inventor and businessman. He developed many devices that greatly influenced life around the world, including the phonograph, the motion picture camera, and the long-lasting, practical electric light bulb. He was one of the first inventors to apply the principles of mass production and large-scale teamwork to the process of invention. Due to this, he is often credited with the creation of the first industrial research laboratory.

“Our greatest weakness lies in giving up. The most certain way to succeed is always to try just one more time.” – Thomas Edison

Nikola Tesla was born in 1856 in Croatia and emigrated to the United States in 1884 to work with Thomas Edison. Known as an inventor, electrical engineer, mechanical engineer, physicist, and futurist best known for his contributions to the design of the modern alternating current (AC) electricity supply system. Tesla was knowing for his achievements and his showmanship. Eventually earned him a reputation as an archetypal “mad scientist”. My future scientist also loves that the new car company is named after him.

“I do not think there is any thrill that can go through the human heart like that felt by the inventor as he sees some creation of the brain unfolding to success… such emotions make a man forget food, sleep, friends, love, everything.” – Nikola Tesla

Marie Curie, born in 1867, was a Polish and naturalized-French physicist and chemist who conducted pioneering research on radioactivity. She was the first woman to win a Nobel Prize and went on to win two. Her achievements included the development of the theory of radioactivity and the discovery of two elements, polonium and radium.

“Life is not easy for any of us. But what of that? We must have perseverance and above all confidence in ourselves. We must believe that we are gifted for something and that this thing must be attained.” – Marie Curie

Albert Einstein was born in 1879, in Ulm, Germany. His most well known accomplishments include developing the special and general theories of relativity, and the E = mc2 equation. In 1921, he won the Noble Prize in Physics for his explanation of the photoelectric effect. Considered to be the most influential physicist of the 20th century, Eintein published more than 300 scientific papers.

“Education is what remains after one has forgotten what one has learned in school.” – Albert Einstein

There is far more than just these 10 scientists to learn from and study. In fact we are constantly finding new people to inspire our passions with their work.

Want a resource to help you delve into the lives and work of some amazing Scientists and STEAMists? Check out our Famous STEAMists Activity Book.

For each person there is a biography and quotes so you can learn about their lives and work. Worksheets such as word searches, word scrambles and fill in the blanks, help to ensure understanding and comprehension. Don’t worry, answer keys are provided. In addition, activities inspired by the works and discoveries of each person have been hand picked and included for you to do with your kids.