It was the first day of school and I thought it would be fun to do a little welcome back sheet with some cute kid questions. Little did I know my own kids would change my perspective on something I had been taking for granted for years and why I’m not asking my kids what they want to be when they grow up, anymore.

Our morning was like most first days at school, a little excitement, a little nerves, lots of bouncing and giddiness. I wanted to keep things light so I gave them a fun “get to know you” kind of worksheet. It asked them simple things like height and weight, favourite colour, best friend, favourite animal, but then we got to the last question…

What do you want to be when you grow up?

Now for most kids they would shoot an answer from the hip so fast you wouldn’t even have a chance to take a breath, but not my kids.

Preston, my little man with so many delays and who has faced so much struggle in life, looked up at me like I had three heads. I repeated the question, thinking maybe he didn’t understand due to his language delays. He scoffed and said, “Anything I want.”

I smiled, feeling a twinge of pride at the show of confidence from my little man that often struggles from lack of confidence.

Then Jackson piped up from across the room, “What’s with the last question? How am I supposed to know? I’m WAY too young to have to commit anything in writing about this! I can decide that when I’m way older, for now I’m just a kid!”

I laughed at the time, thinking about my precocious kids and how their confidence had grown so much, but then I started to think a little deeper about their reactions.

And I think it’s time to stop asking, “What do you want to be when you grow up?”

Here’s a few reasons why…

– We live in an age where life is changing so rapidly that most of the jobs our kids are going to have in the future have not even been invented yet.

– How many people graduate, get a job and then never change their jobs for the rest of their life? Almost no one. A very tiny percentage of the population might but it’s a true rarity. Life is changing too fast and most people go through three, four, five or even more careers in their lifetime.

– I’ve been working really hard to teach my boys to be in the moment to help decrease anxiety and stress. To be mindful and focus on the here and now and not worry about the future. Asking them a question about the future goes against what we’ve been practicing for the past few months.

– Preston is right, my kids can be anything they want. Why limit them to one thing when there is a whole world of opportunity out there?

Now this doesn’t mean we won’t talk about growing up, life, types of jobs and generally how to prepare for adulthood, but I will not be asking them that one question. The question that makes so many people cringe and stress about a future none of us can see or predict.

Because how they earn their money in some distant, unknown future has little meaning in the grand scheme of things. Instead I want to know that they will be happy, kind, fulfilled and successful in whatever way that looks to them. Success often doesn’t look the way society claims it must look. It’s about waking up every day, filled with passion, love, and a drive to make our world a slightly better place than it was the day before. We don’t need to be adults to do that. 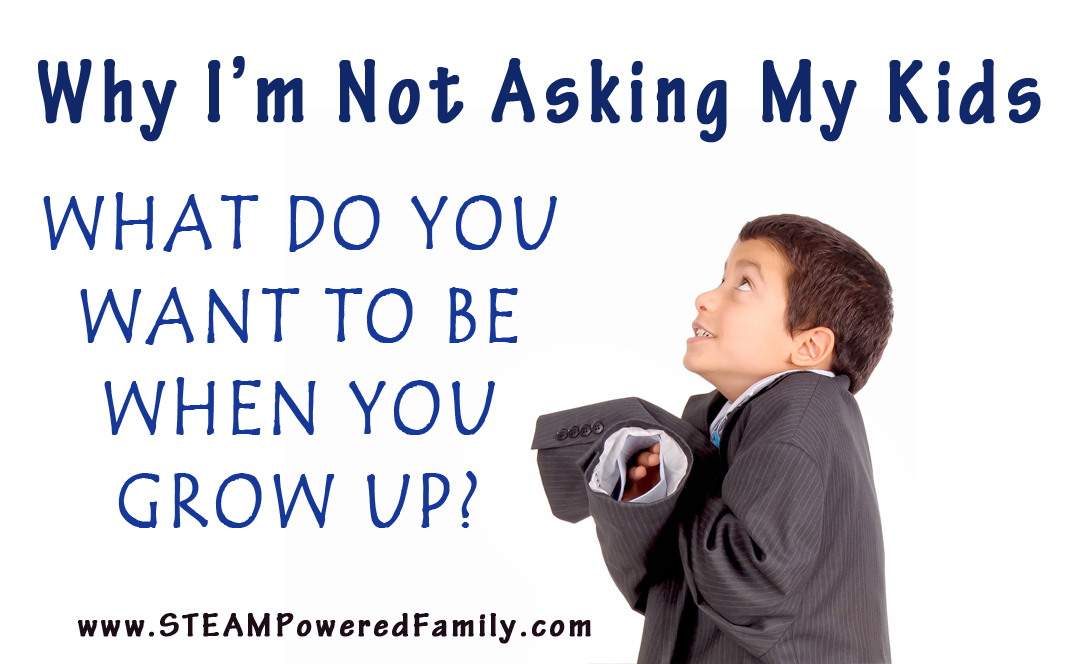