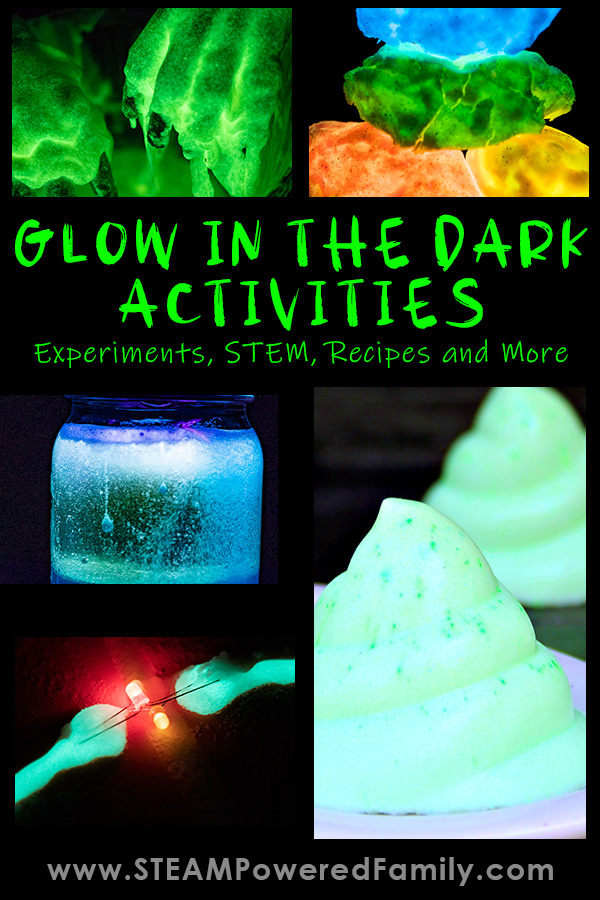 As the nights get longer, one of the things my kids always get excited about is glow in the dark activities. There is something about that magical moment when the kids do something and it suddenly comes to life in the dark that thrills the kids and makes them even more passionate about learning and doing these educational Glow in the Dark Activities. Here are some of our favourites!

Glow in the Dark Projects

How Does Glow In The Dark Work?

When something glows in the dark there are a few ways this can happen.

Cool Tip! Did you know some animals glow under black light?

Often in our experiments we will use items that only glow if we have a black light present. This includes things that use tonic water which glows thanks to a special ingredient called quinine.

When you use a black light it gives off harmless, highly energetic, ultraviolet (UV) light that is invisible to humans. Certain fluorescent substances absorb ultraviolet light and re-emit it at a different wavelength, making the light visible and the material glow.

What you see glowing under blacklights are phosphors. A phosphor is any substance that emits visible light in response to some sort of radiation. A phosphor converts the energy in the UV radiation from a black light into visible light. For example, the quinine in tonic water contains fluorescent molecules that are made visible in the dark thanks to the help of a black light.

This is the type of glow in the dark projects or items that you charge under a regular light or sunlight. Then when you turn off the light it will glow before slowly fading.

Luminescence is caused by chemicals called luminescent phosphors in the paint. There are different types of Luminescence, in our experiments we are working with glow in the dark paints and pigments that are Photoluminescence. This means they need to charge in the light. Then when you turn off the lights you will have a temporary glow. You will have the brightest glow when you first turn off the lights, then it will fade. You can “recharge” the glow simply by turning on the lights again for a minute.

The science behind this glow in the dark is quite interesting. When we expose the glow in the dark paint to light, molecules in the paint absorb photons in the visible region. This excites the electrons to a higher electronic excited state. When the lights are turned off it radiates a photon as the electron returns to a lower energy state. Eventually the electrons lose their energy and their glow.

OK, so now we have a basic understanding of how things glow, let’s look at some fun Glow in the Dark Activities for Kids!

Glow in the Dark Activities

Glow in the Dark Lava Lamp

In this activity we create lava lamps, including one version that glows in the dark. It’s a fun chemistry activity that kids love to make.

We really love making these simple salt circuits. They are a fantastic way to start with circuit building for kids. And with this fun twist we make a circuit that not only lights up, but also glows in the dark. We have made three versions: Halloween Glow Circuit, Christmas Tree Circuit, and a Valentine’s Day Glow Salt Circuit.

Glow in the Dark Bath Bombs

We really love making bath bombs. It is a great way to teach kids about chemistry in a very practical and hands on way. Plus kids love using bath bombs! We have made a few glow bath bombs in the past including our very popular Halloween Surprise bath bomb that not only glows in the dark but has a spooky surprise inside. Plus a gorgeous Northern Lights bath bomb, a glow in the dark donut bomb and glow cupcake bath bomb.

One of our favourite sensory experiences is Moon Dough. It is luxurious and silky like a cloud. Especially with our very special recipe! To make our Moon Dough experience even more special, we made this Rainbow Glow version that was mesmerizing with it’s stunning, glowing colours.

Glow in the Dark Homemade Soap

“Who ya gonna call?” If you know the answer to that question, you will love this Ectoplasm Glow in the Dark Poop Soap! This hilarious creation will have kids rolling with laughter as they wash their hands over and over again.

Glow in the Dark Oobleck

Non-Newtonian Fluids, also known as Oobleck, are a childhood favourite! Not only do kids get to explore some fascinating science with this project, but they also learn about states of matter and build fine motor strength. Oobleck is mind-boggling the way it turns from solid to liquid, from just your touch. And this Glow in the Dark Oobleck recipe is super easy, with two variations to suit your needs and to explore both types of Glow in the Dark that we discussed earlier in the science section.

Glow in the Dark Sensory Bottle

Glow in the Dark Slime

If you are going to make slime, make really, really cool slime. Like this Glow in the Dark Slime recipe!

Glow in the Dark Homemade Plastic

Have you ever made plastic at home? It’s a fascinating experiment to do with kids. In this project we made bioplastics using milk. With a few twists we caused our plastic to glow! Then we came up with a new and improved way to make it glow even more!

Want a quick and fun chemistry experiment for the kids. Try this simple reaction that results in a Glow Eruption!

Glow in the Dark Jello

There is something about making a project or experiment glow that just makes it so much more exciting and fun! I hope you enjoyed all of our Glow in the Dark Activities.